Everyday Musings of an Extraordinary Woman

Archive for the tag “pictures”

Recently, two old friends posted pictures of me on Facebook from my senior year of high school. And they were two friends who were friends with each other, and I actually met one through the other. Both have been very important in the story of me.

This was the first picture. I don’t know what we were doing or where we were. I do know that the picture, while not inspiring memories of one specific event, evoked a plethora of memories last night and today, along with the realization that my daughter looks so much more like me than I realized. And that I wished I had appreciated the head of hair I was blessed with when I was younger!

The other picture, posted today, brought back even more memories, partially inspired by the surroundings: 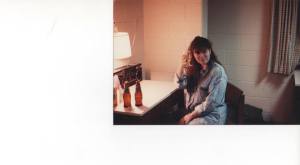 Now I don’t know what kind of statues the military has, but I won’t name the location of the barracks that was taken in, nor whose room it was. I’m pretty sure that after 25 or so years, the statute of limitations has run out on the fact that I was drinking at 17 there.  I don’t think I drank all of the beers on that desk, though. But I won’t swear to it either. Nor can I say I can remember exactly which night that was, as it wasn’t the only evening spent there.

It’s amazing the memories that can be brought up by seeing a picture of yourself from so many years ago. Specifically, a casual, non-posed one where you are relaxed and enjoying life.

I do know that year was a very important one for me, not only because it was my senior year of high school. It was an incredible year, which I was fortunate enough to recognize shortly thereafter. I was young, confident, happy. In so many ways I was so very innocent, even though if you’d asked me then, I would never have agreed with you. But knowing what I know now about life and the world in general, I was so very, blissfully innocent, and happy.

Funny, it just hit me that I know I had my share of teen angst that year, as we have all had. Yet when I look back, I don’t remember it unless I think really hard, and then it’s just so softened. At the time I’m sure it was more serious to me.

Old friends, good friends, pictures and memories. Keep them all close to your heart and you’ll always find a reason to smile.